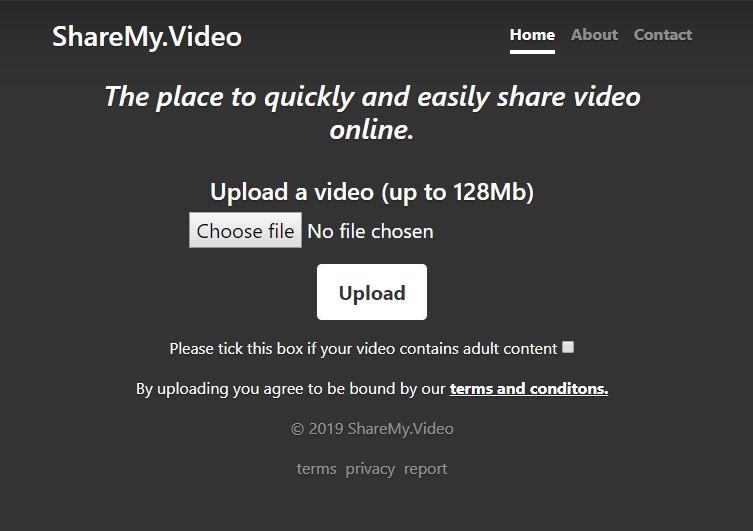 I started work on a new personal project the other day aimed at making a website which allows people to upload video straight from their mobile or desktop camera to share on the web via a link, https://sharemy.video

I wanted to make something which was quick and easy to use so that I could just drop a link in places like Reddit and forums to share a video with people where video support wasn’t natively available.

I’d found myself frustrated in the past by not being upload from a mobile straight to YouTube and wanted to make something where users could quickly and easily just record,upload and share small videos with people online via a link, My thinking was for it to be like the WeTransfer of the video sharing world.

I was not aiming to be Instagram or Snapchat which are social networks, or even YouTube which doesn’t support mobile uploading and has lots of forms to complete, I was aiming at offering people a quick, simple and easy way to share their video with a link, without any fuss or complexity to deal with.

Simply record the video from your camera, upload, then share your link!

I had lots of ideas for the development of this project and for possible features and functionality including future things to develop as well.

The name of the website and the URL for example had to be something short and catchy, easy to type in and to use, with me in the end opting for https://sharemy.video which says nicely I think what the website is about.

I did not want to support piracy or sharing of copyrighted content, so I designed my system to only allow small filesize uploads up to 128Mb which is fine for short mobile videos, and with videos only being kept online for 30 days and then getting deleted, which I felt would probably discourage it being used for piracy. I was aiming at people who want to simply just share a video from their camera online.

The shared videos would only be shared from the person who recorded it to the people they gave the link too as well, there was to be no public listing of all uploaded videos or anything else, I wanted to keep it simple with it just being used to share video in a private manner between people in this way.

I was thinking it would be great for things such as sharing a quick video of an installation on site with someone back in the office for example, and other similar short private videos.

I started off using a basic Bootstrap template to build my pages on my website, this gave me a sound responsive foundation to work from which worked across devices.

After designing I then began working in PHP to build it. I had lots of ideas such as using a database free system where all information about the video was encoded straight into the filename, and using a video CDN to reduce bandwidth usage as well as improve playback performance.

I chose to use JW player for the playback of videos on my website rather than just pure HTML 5 embedded video as I felt it offered a better experience to the end user and allowed me to keep things within the page design.

I felt that asking people to help police our website and keep it clean by reporting any shared videos which violate the terms of uploaded content would work best, as such content could then be automatically blocked from being viewed until someone could verify the content. I felt this was the best way to keep things fun and safe for all, and simply ignoring such things at the design stage would be an oversight on my part too.

I wanted the system to show an advert before allowing people to view which have been shared videos as a way to support the website, and the system had to design it to prevent hot linking direct to video files so that this could not just be simply bypassed either.

Along the way I found myself learning a lot about working on an online video website, and even hit upon an idea for another personal project too, as I wanted to find a service much like an API where I could send a link to a video and just get a thumbnail back, but found that despite being a very easy thing to do in PHP no such service exists online, making me think maybe I should make this too.

I found some interesting resources and tips and tricks online as I read articles relating to carrying out the things I wanted to do, such as a really nice guide to getting a thumbnail from a video using only JavaScript which could then be saved via AJAX onto a server allowing a user to choose the thumbnail for their video straight from a web page preview!

My initial development on this project has now finished, the website is live at https://sharemy.video

There are still features to be finished for example the video CDN is not hooked up yet, I was offered an extended free trial by one company of their service to test and develop with their API which I hope to do so soon. I have yet to properly plug in the adverts, the page is there but I am waiting on the nod from Google to setup AdSense, and I could also do other things such as make use of a short code API to further condense the video links too.

I had lots of thoughts on how to market the website online as well in order to get people to use it via social media and other means as well which will be the next step, for example I thought it might be fun to encourage people to use it to share a video of themselves to friends on new years eve, however I should probably sort out that video CDN before I do that!

For now I am just happy to have a live working version of the idea I had online for the world to see, I think it’s kinda cool, and it’s been fun to work on over the past few days. The project has given me a good chance to think about what is involved in making such a website, and I think the end result is looking quite nice now as well, if you like you can watch the tutorial video I made about the website by visiting https://bit.ly/2S1kM4X

There is lots left to do but I hope you like the project as much as I do!